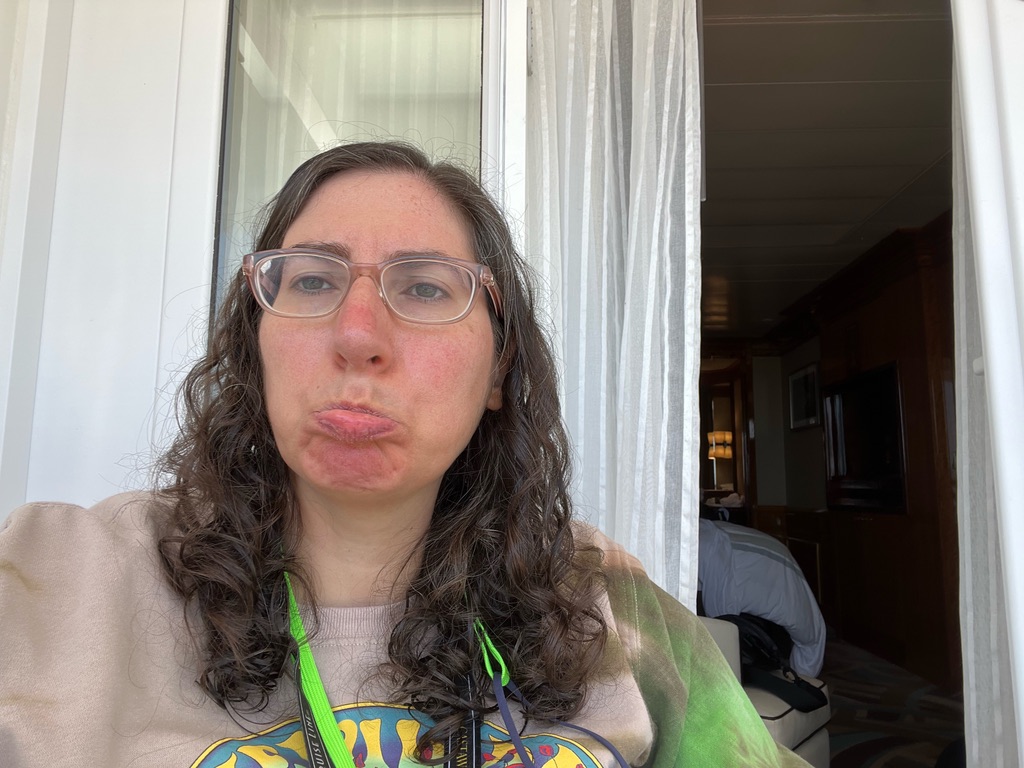 What happens if you test positive for COVID onboard a Disney Cruise?

You can hear more about our experience on our podcast. 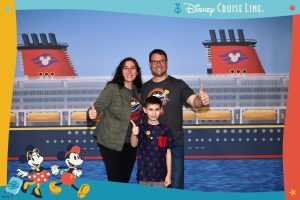 Our family (my wife, my eight-year-old son, and myself) recently took two back-to-back cruises aboard the Disney Wonder out of San Diego.  Our trip was interrupted by COVID, and we wanted to share our experience to help others who are looking to cruise right now.

The first cruise was a 5-night sailing that included Disney’s first ever call on Catalina Island, and a stop at Ensenada.  That cruise had approximately 1300 guests onboard, one of the fuller cruises we’ve experienced on Disney Cruise Line, in the five sailings we’ve taken since July.  That cruise included most of the COVID safety protocols we’ve come to expect. All passengers over the age of 5 were required to submit proof of COVID vaccination prior to embarkation.  All passengers were tested at the cruise terminal on the day of embarkation. Social distancing protocols remained in place onboard, so seating in at least some indoor venues was still distanced, dining arrivals were staggered, groups were not mixed at dinner seating, and any buffet-style food service was either discontinued or reduced and done by crew. 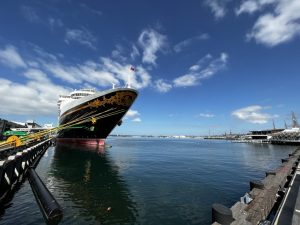 The two most notable differences in protocols on this sailing from prior sailings was that Disney moved to rapid-antigen testing at the port, rather than PCR testing. Antigen tests (sometimes called lateral flow tests) are the same tests you can do at-home and are far less sensitive and accurate at detecting COVID than PCR tests.  The second difference was that Disney made wearing masks onboard optional for all guests.  Crew were still required to wear masks, and were primarily wearing KN95 masks, as the Wonder was in “Orange” status and being monitored by the CDC.  Crew were testing daily for COVID and we learned that a number of entertainment crew were in isolation and monitoring after being identified as close-contacts of a crew member who had tested positive.

Our second cruise was also a 5-night sailing, with stops in Cabo San Lucas and Ensenada. On the last night of the first leg of our sailing we tested with at-home rapid antigen tests we had packed with us, for peace-of-mind, as between sailings we were required to disembark and take an additional antigen test at port before we could re-board. Needless to say, we were all negative on both tests, and were able to board the Wonder for our second cruise.

On our second sailing, we had 1900 passengers onboard during spring break week; marking one of the fullest sailings the Disney Wonder has had since its restart.  Notably, for this sailing Disney dropped all of its social distancing protocols onboard.  This meant a return to full theaters. Self-service buffets returned. Capacity limits on venues dropped. Seating in main dining was pushed closer together to accommodate more tables, and arrival times were no longer staggered. 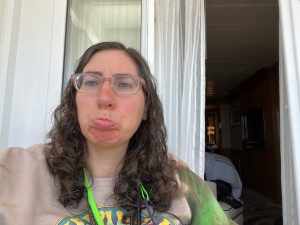 Both of our cruises were largely uneventful, and some of the best we’ve had since the restart, until our second-to-last evening onboard.  That evening my wife developed a slight tickle in her throat and a mild cough. Later that night she said she was definitely feeling sick, and probably coming down with something. The next morning, I had her take an antigen test that we had brought with us, and it was negative.  I was fairly convinced the test was accurate since she was experiencing symptoms, and that she had simply picked-up a cold.  Something that had happened to us in November aboard another cruise. Nonetheless, Disney advises guests with any COVID-like symptoms to report themselves to ship’s medical, and so I encouraged my wife to call and report her symptoms.  She did.

What followed was any traveler’s worst nightmare.  Two nurses came to our stateroom for a cursory medical exam, and to collect a sample for a PCR test. As we ate breakfast, we were sure the test would come back negative based on the prior result of the antigen test. It didn’t. A phone call an hour later revealed my wife had tested positive for COVID. At that point we were advised that she would need to quarantine, but that my son and I, who were not symptomatic, were free to continue to roam the ship, without restriction, as long as we wore masks indoors. My son, for instance, was permitted to go to the kids club, as long as he was masked.  A subsequent call advised that my wife would need to be transported to a new stateroom, and several crew members in full PPE (including Tyvek suits) came to collect her about an hour later and transport her to her new quarters – an ocean view stateroom on deck two.

What Happens Onboard if You Test Positive for COVID? 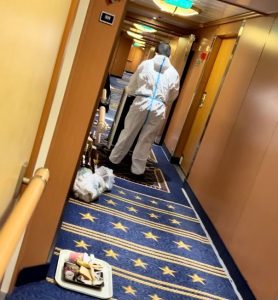 After my wife’s transfer to deck two, information was sparse.  While my wife could order food and drink, she had no more contact with the medical staff.  Guest services did call to find out what our post-cruise travel plans were, and to confirm we would cancel our flights and either drive home or make arrangements to quarantine locally.  I got no updates on my wife’s condition from ship’s crew, but thankfully was able to text her throughout the day and night to check-in.

We largely had to seek out information on how we would get off the ship, and what we were supposed to do after disembarking. In that process we learned that we had to disembark separately from other passengers, that Disney would request that U.S. Customs and Border Protection allow us to disembark first (around 7:30 am), and that Disney crew would help us off with our luggage. Disney also arranged for a car to transport us to the San Diego airport, where we intended to pick-up a rental car to drive ourselves back to Seattle, where we live.

How Did Disney Cruise Line React?

On the morning of disembarkation, a steady stream of calls started.  First, crew came to pick-up our luggage.  Next, we were apprised that we would indeed be disembarking separately from and ahead of other guests.  Finally, when our car arrived at about 7:45 am, my son and I were told to make our way to deck one to meet up with my wife for disembarkation.

When we arrived on deck one, we found ourselves in a scene out of a movie.  My wife was being walked out, flanked by three crew members in full PPE, one of whom was using a sprayer to disinfect the air behind her.  A CBP officer checked our passports, and crew took our luggage off pier side.  We were walked from the ship to a security gate, where a waiting car took us to our rental car and we started our two-day-long, 1300-mile drive home. As an aside, it was clear my wife was the only passenger in quarantine for this sailing.

Within an hour of disembarking, we were contacted by Disney Cruise Line shoreside guest relations, who thankfully advised that Disney Cruise Line would reimburse us on a pro-rated basis for the one day of the cruise my wife was in quarantine.  DCL also asked that we retain all of our receipts for our journey home, as they would reimburse us for those costs too.  After we returned home, DCL also worked with us to provide reimbursement for a hotel room we were unable to cancel the weekend after our cruise at the Disneyland Resort.  DCL did all of this, even though we did not have travel insurance through the cruise line for our trip.

What Did Disney Do Right?

Reflecting back on our experience, now that we are all healthy again, we had a few observations we wanted to share.

We knew the risks going into our vacation and that’s really important right now.  We fully understood that if someone in our family tested positive we could be prevented from sailing, or have to find a way to get ourselves home.  Any traveler heading out on the road should fully appreciate this potential and prepare a back-up plan.  We also think travel insurance is an important tool right now, but make sure you know any limitation on coverage for COVID-related events.  We carry an annual policy for our family to cover all of our trips.

We applaud Disney for how it reacted to our situation after we got off the cruise.  While the onboard communication and assistance felt lacking and aimed primarily at my wife who was not really in a condition to make decisions; once we were off the ship DCL leapt to action.  They contacted us daily to check-in.  They made clear what we could expect.  And, they ultimately followed through on all of their promises.

What Could Disney Have Done Better?

Despite all of this, we are also critical of DCL over its current set of protocols for a couple of reasons.

First, Disney announced that it would drop its social distancing protocols for our second sailing, in the middle of our first sailing.  Prior COVID-related changes have been made with more notice to passengers so they could make decisions about whether continuing to sail was something they wanted to do under those conditions. It’s also puzzling why Disney decided to make this change amidst the highly contagious Omicron variant, and a very busy spring break sailing. This is especially true when the Wonder was being monitored by the CDC, and crew were clearly being isolated and quarantined.

Second, Disney’s decision to shift to antigen testing seems misguided. While we understand PCR tests take longer and are more expensive, they are far more accurate than antigen tests. My wife tested negative on an antigen test, despite being symptomatic, and tested positive on a PCR test the same day. Disney cruises are filled with families with small children, including children who cannot be vaccinated. Shifting to antigen testing in the midst of Omicron, which is rife with breakthrough infections, fundamentally creates a risk that asymptomatic and even symptomatic individuals are being allowed onboard.

Third, we did the right thing – we reported, despite a negative antigen test. On the same day I heard kids and adults alike with coughs that sounded a lot like my wife’s but had likely not reported themselves to the medical team.  After our cruise, several other passengers reported they had tested positive for COVID within a day or two of disembarkation. If Disney is going to be serious about limiting the spread of COVID, then they have to be serious about testing those with symptoms. Currently, Disney charges guests a fee for testing if they have a negative result with symptoms. That together with the onerous consequences if you test positive means a lot of passengers will chose to forego testing, rather than confirm if they have COVID.

At the end of the day our trip was impacted, but not as badly as it might have been. Will we still cruise? Yes, we will.  But we are thinking long and hard about our back-up plans if we have to deal with COVID again, and recommend anyone looking to sail fully understand the environment, protocols and consequences before embarking on their next cruise.