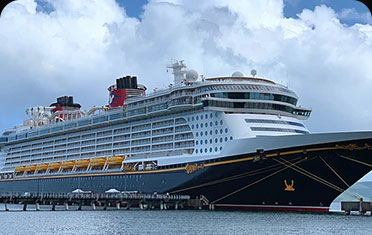 Nine Things You Won’t Find on a Disney Cruise

(A version of this article as authored by the DCLDuo is also available at https://cruisingisntjustforoldpeople.com/category/disney/) 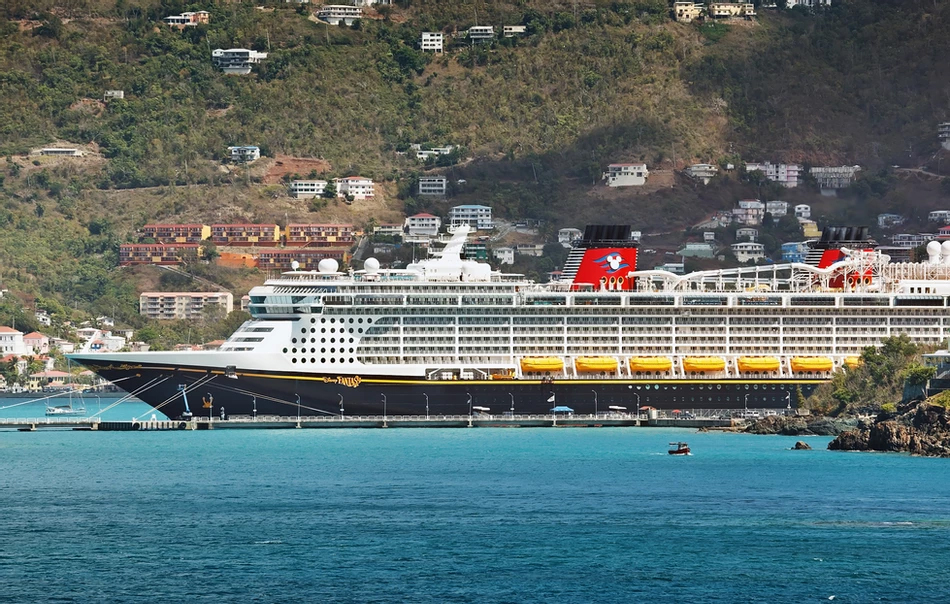 In a prior article we discussed a lot of things that are “included” in the premium cost of a Disney cruise. But, there are some things that you simply won’t find on Disney Cruise Line (DCL) at the moment. We’re going to highlight ten things you will not find on a Disney Cruise, but that you might expect to find on other cruise lines.

That’s right, Disney cruises don’t offer the traditional drink packages you might find on other cruise lines. We haven’t found that to be an issue for our own vacations for a few reasons.

Second, you can take advantage of drink specials like the “drink of the day” (usually something fruity and tropical) or beer buckets. Disney also offers a special beer mug. For $16.95 you get a 22 oz. beer mug, which Disney will then fill for the same price as a 16 oz. beer. A couple of pro tips. You don’t have to carry the mug around everywhere. When you’re done, simply exchange it for a mug “token” and the next time you want a beer you can trade the token in for a fresh mug. Also, at the end of the cruise, you can either walk off with the mug or the token. Simply bring back either on your next cruise and “voila!” you can keep the deal going. No need to purchase a new mug.

Third, Disney does not charge for soft drinks onboard. Soft drinks are included at meals, and there is a self-service soft-drink machine on the pool deck if you want to grab a drink during the day. Disney does charge for soft drinks if ordered at one of the onboard bars or lounges, and at the onboard theaters. Pro tip, bring a larger cup for drinks onboard so you can fill it at the soft drink stand free of charge. The provided disposable cups are typically very small.

Lastly, if you’re an espresso or latte drinker, make sure to get a “punch card” from the Cove Café. If you buy 5 specialty coffees, your sixth one is free. Pro tip, if you have a partially filled punch card at the end of your cruise, bring it on your next cruise and keep the savings going.

Disney Cruise Line does not have a casino onboard. For some, that’s a real dealbreaker. For our family, it’s not. We’ve found some cruise lines design their ships “around” the casino. So, it often feels like you have to walk through the casino if you want to get to the ship’s most used areas easily. That can sometimes mean walking through an indoor smoking area onboard some ships. No casino means no indoor smoking. We also find Disney’s ships are much easier to navigate without the casino taking up centrally located space in higher traffic areas of the ship.

If you really need your gambling fix while onboard, Disney does offer daily Bingo. Or, you can choose an itinerary that stops in Nassau to visit the Atlantis hotel and casino.

Disney was a pioneer in “rotational” dining, where you and your serving team rotate between one of three main restaurants nightly. Depending on which ship you’re on, Disney also offers one or two adult-only onboard dining experiences for an extra charge – Palo and Remy. But, if you’re looking for Guy Fieri’s latest restaurant, the Johnny Rockets, or an impressive line-up of celebrity chef dining, you won’t find it on Disney.

Don’t get us wrong, Disney’s dining is wonderful. Reviewers typically put it on the higher end of the food spectrum as compared to other family friendly cruise lines, and you’ll rarely hear a review that something was simply inedible. Far from it, in most cases. Similarly, Palo and Remy are truly amazing dining experiences and well worth the additional fee in our opinion. Remy is essentially a 2-3 Michelin starred experience at sea (Michelin doesn’t rate cruise line restaurants). The chefs behind Remy’s truly amazing menu are, also, both celebrities in their own right (notably, one of the current chefs is the chef overseeing the Victoria & Alberts restaurant at Walt Disney World, which is Michelin starred). But if you’re looking for the stars of Iron Chef, you won’t find them onboard.

Disney has, for the most part, not followed suit with the other cruise lines in terms of wave riders, rock-climbing walls, ropes courses, escape rooms at sea, go-cart tracks, etc. That’s in part because Disney’s ships are smaller than some others out there, and these kinds of facilities take up a ton of room. Disney has also made space on its pool deck for multiple pools and adult-only areas, leaving little space for these kinds of activities. So, if you’re seeking onboard thrills, you might be a little disappointed. 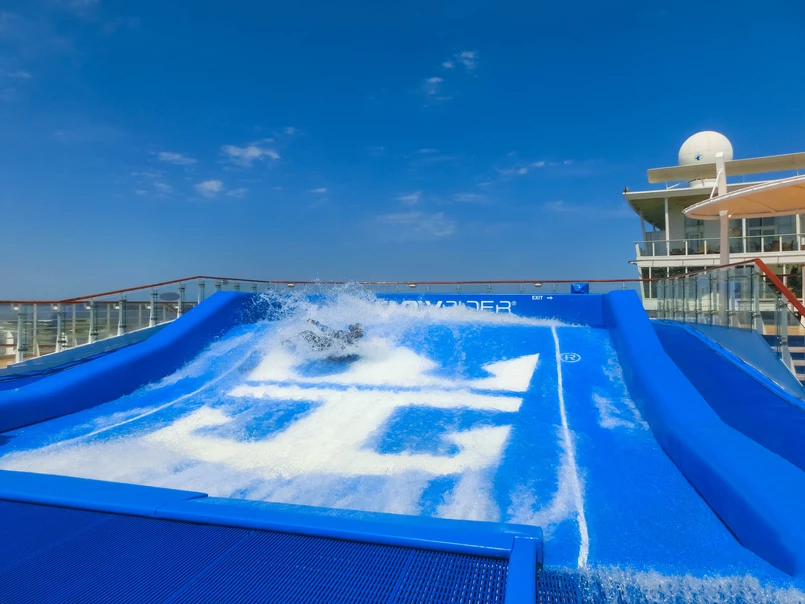 That said, Disney does offer plenty of fun onboard. In particular, each of the ships does have an onboard water slide. The Dream and Fantast feature the “Aqua Duck,” a water “ride” themed after Donald Duck and his nephews that takes you all around the top deck of the ship. Onboard the Disney Magic you’ll find the “Aqua Dunk” which is thrill slide of the “drop” variety. It’s not the most aggressive drop slide out there, but it’s still plenty thrilling.

Note, Disney’s onboard offerings could change significantly when it introduces it’s next three ships. With the Disney Wish still expected to set sail in early 2022, we may find Disney upping its thrill seeker game. Little is known about the Wish’s onboard offerings, but there is speculation about everything from a roller coaster at sea (a place where Disney ought to excel) to some of the more traditional onboard activities we’ve seen on other lines. Fans have been outspoken that it’s time for Disney to ditch the traditional mini-golf and a basketball court in favor of something more innovative.

#5 – A Raucous Bar and Nightclub Scene

If dancing the night away until the wee hours of the morning is your thing, a Disney cruise isn’t for you. If you’re looking for a lot of live music at night, Disney is also not going to impress. 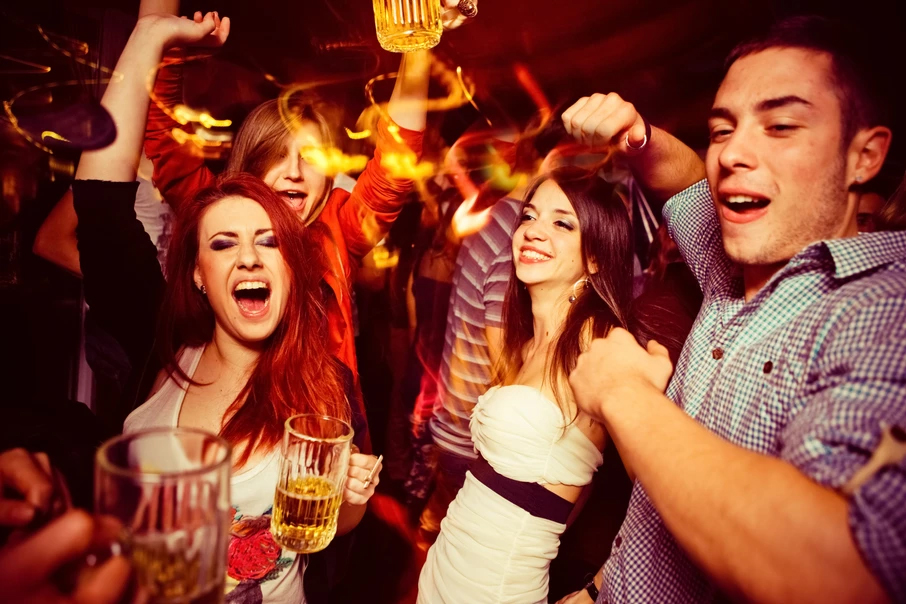 While Disney does have an adult area of the ship with several themed bars and some live music, this is not an all-night dance scene, or a raucous crowd. You can hear some talented singing and piano players, see adult acts, and dance to DJ music, but you should expect adult activities to wind down earlier than you might find on other lines. In general, the adult areas are fun, low key and relaxed. So, if you like a slower pace to your nightlife, you’ll find it in the many comfortable lounges and bars onboard Disney’s ships.

If you like to find great deals on cruises, you’ll need to look someplace other than Disney. Demand for Disney cruises consistently outpace supply. So, opening-day prices for most itineraries are the best you’ll do when it comes to price. From there, prices generally only go up. There are some exceptions with special rates for military personnel, as well as Florida, Canada, UK and EU residents (on occasion). But if you’re a bargain hunter, your best bet is too book early, and understand that Disney is generally seen as a more premium line that can garner premium prices, especially from Disney enthusiasts who are used to paying that a premium on other Disney vacations. We generally believe the premium is justified for Disney’s service level alone, but it’s not for everyone.

Because Disney caters to families, you won’t find a lot of enforced dress codes. There are generally semi-formal and formal nights onboard, depending on the length of your sailing. But they are largely optional. So, if you and your family want to get dressed-up for those special pictures, great! But, don’t expect everyone on the ship to be decked out in their best, and tuxes are largely unheard of on formal nights. So, don’t get upset if the family next to you is still rocking a Disney t-shirt on formal night, while you’ve dressed-up. It’s the nature of Disney cruising. 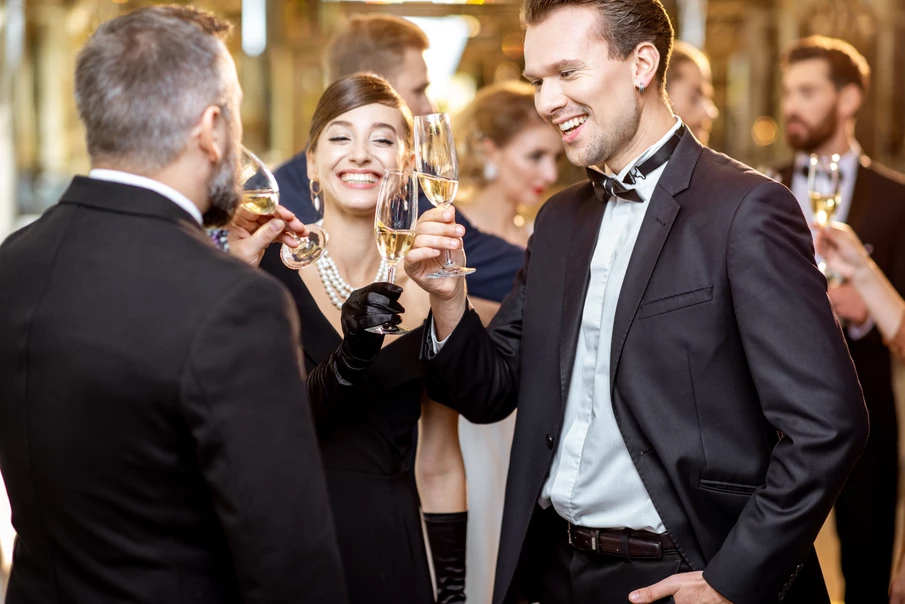 There are some notable exceptions to the dress-code requirement; namely, the adult restaurants. Both Palo and Remy do enforce a dress code for both brunch and dinner seatings. For Palo, that will generally mean slacks or jeans (nothing ripped or with holes) and a collared shirt. Remy requires gentleman to wear slacks, a jacket and collared shirt (jackets are optional for brunch or dessert offerings). The restaurants give ample reminders of the dress code, and you will be turned away if you are not dressed appropriately. We’ve seen people sent back to their staterooms to change or given the dreaded “loaner” jacket. So, if you want to experience Palo or Remy, dress appropriately.

Well, there’s no casino and a lot more is included in a Disney cruise than on some other lines, so Disney has to get its money from somewhere, right? You can expect to find a lot of Disney themed merchandise onboard a Disney cruise. In fact, if you want DCL-themed merchandise, you’ll only find it onboard. Disney does not make most of its cruise line merchandise available for sale online. That means lots of Disney collectibles like t-shirts and pins, or our family’s favorite, ship models and atrium statuettes. If you want to remember your cruise with a Disney collectible, buy it early, as they do sell out, and most items are not available for purchase anywhere outside the ship – unless you’re willing to pay a premium on eBay.

If you like the ability to shop for a lot of name-brand merchandise, you’ll need to save your shopping for the ports. Disney does offer brands like Dooney & Bourke (primarily Disney-themed purses), luxury watches, figurines and jewelry, but these are going to be premium brands and premium prices, and if there’s a Disney tie-in or theme, expect that to be the onboard offering. Disney is the first and only cruise line to feature Tiffany’s at Sea, so if you’re looking for jewelry they’ve got you covered. But, even there, Tiffany’s sells some special onboard jewelry pieces themed to Disney Cruise Line. The same is true for art onboard. If you’d like to pick up a display piece for home expect it to be Disney themed.

While some other cruise lines have really pushed forward with onboard Internet and technology offerings; this has been a place where Disney frequently lags and, in most cases, truly disappoints. Onboard Internet is slow and expensive. And while the parks have moved toward app-based offerings and magic bands for lots of things, Disney’s cruise line app has been a slow adopter. Although more recent upgrades to the DCL app have given enthusiasts hope.

Many are expecting DCL to accelerate its onboard technology in the wake of COVID as touchless and self-serve interactions become the norm. Guests were also surveyed recently about their tech habits and interest in voice assistants, presumably as research for development of the Disney Wish; so, there may be a glimmer of hope there. But for now, Disney’s onboard tech is pretty lackluster as compared to what it offers at its theme parks, or what other lines offer – like the Ocean Medallions on Princess Cruises.